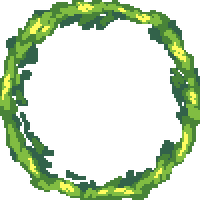 The Alpha Virus is a craftable post-Moon Lord rogue weapon. It fires a large plague cell that has a lethal aura, dealing damage to every enemy that enters its radius. It slowly fades as it flies and splits into six plague seekers on contact with tiles.

Performing a stealth strike with the Alpha Virus will result in the projectile moving more slowly and allowing plague seekers to accumulate around it as it flies.

Its best modifier is Flawless.