Arsenal Labs are various laboratory structures that generate in various biomes around the world. All laboratory structures contain Aged Security, Security Chests, along with other functional furniture that allow the creation and charge of several weapons. The labs are defended by Lab Turrets, which fire lasers at nearby players. 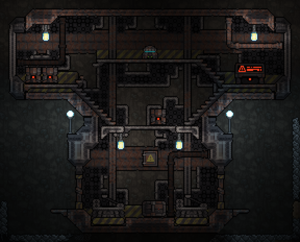 The abandoned workshop is a small, dual-level structure comprised of Rusty Plating and Pipes. The upper level expands outward and contains some storage crates and boxes. The top platform holds an aged security chest. The lower level of the workshop contains two powered off Draedon Fuel Factories. It is the smallest of the Arsenal Labs, and multiple can spawn in a single world. 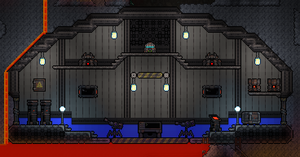 The abandoned research facility is a large structure featuring a dome shape comprised of laboratory plating. The structure is defended by two lab turrets on the ground. The upper platform holds an aged security chest, and two Draedon's Charging Station to the left and right of the chest. The ground floor consists of various crates and boxes, and some defunct laboratory equipment. Multiple abandoned research facilities can spawn in a single world.

These Arsenal Labs are unique and only spawn in their respective biomes. 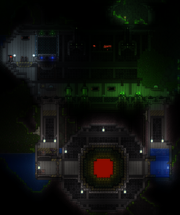 The Jungle Bio-center lab is located randomly in the Underground Jungle, and features a core of Plagueplate, with two smaller vertical shafts on the left and right of it. Above the core, there are two large robotic arms with an empty platform, with some laboratory equipment above it. Below this platform are four Plagued 'Bed's, acting as test tubes, with piping leading up to a large empty liquid tank. A hologram projector can be found to the left of this tank, and security chests, factories, and chargers on the same level as the Plague Plate Beds. The right side of the structure has been completely blown away and contains a massive empty crater. 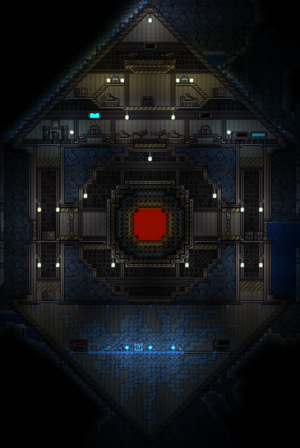 The Ice Bio-center lab is located randomly in the Ice biome, and features a core of Elumplate with two vertical shafts on the left and right, leading to pyramid-shaped structures on the top and bottom of the core. The top pyramid contains various lab equipment, charging stations, factories, security chests, a hologram projector, as well as four lab turrets. The bottom pyramid contains an unlocked Frozen Chest with various ice loot. 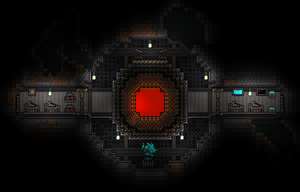 The Space Bio-center lab houses a core of Cinderplate, and is located in the main Planetoid of a world, above the center of the map. It is the smallest of the bio-center labs and only features a core and 2 small branching hallways to the left and right of it. Two lab turrets are located above the Cinderplate core. 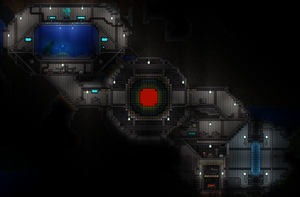 The Sunken Sea Lab is located toward the bottom of the Sunken Sea and features a core of Navyplate with two stairwells branching from the left and right. The stairwell on the right will lead to an observation deck, guarded by a turret, overlooking a large sea prism in a machine. The stairwell on the left will lead upward to a small aquarium filled with water and some sunken sea debris and tiles. In this section, there is various lab equipment and a hologram projector on top of the aquarium.

The Underworld Bio-center lab is located on the far-right side of the Underworld and is the largest of the Bio-center labs. It features a core of Chaosplate, and a surrounding oval-shaped structure containing various pipes, lab machines, a Hellforge and lead anvil, as well as the other content contained in each bio-center lab. One of the hell lab's security chests contains the Murasama, a powerful Post-Yharon sword. The structure contains two massive lava tanks on each side, with branching pipes reaching up into hell's lava lakes. The structure is defended by two lab turrets on its upper floor and two on the bottom floor, one on each side