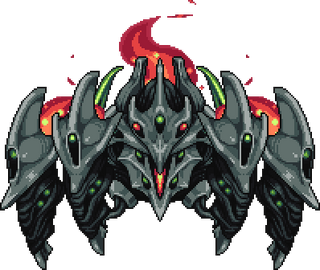 "A titanic cyborg infected by a star-borne disease..."

Not to be confused with Astrum Deus, a similarly-themed worm-like boss.

Astrum Aureus is a Hardmode boss. Defeating it causes an Astral Infection meteor to fall somewhere in the world.

After defeating the Moon Lord, Astrum Aureus increases substantially in difficulty, with boosted health and damage, and drops a new mount.

Astrum Aureus does not spawn on its own and must be summoned at Night using the Astral Chunk in the Astral Infection biome.

If Astrum Aureus is alive when it becomes daytime, it will enrage, drastically increasing the speed it moves and jumps and completely removing its recharging phase.

For more elaborate strategies on defeating Astrum Aureus, including weapon and arena recommendations, as well as a more in-depth breakdown of the fight, see Guide:Astrum Aureus strategies.

When the Astral virus first appeared in Terraria to warp the landscape around it, the site became a phenomenon of interest to Yharim himself. What destructive power, what force of chaos, could have made such drastic changes in a phage that it could assimilate nearly any material into something similar to its own molecular structure? Commissioning Draedon to research the pathogen, Yharim had him look for a method to take advantage of the virus’ virtually alchemic traits, to see if they could be harnessed to serve his needs. Of course, Draedon’s first step was to collect samples. To accomplish this objective, he decided to once more construct an automaton to do his bidding. Although his assistants were at his disposal, he decided against it, as the environment would clearly not be suitable for humans. However, his blunder was in underestimating the enslaving factor of the Astral virus. Even the circuit boards and metal of the great machine he had built to lumber across the infected landscape and bring back subjects, succumbed to the enslaving will of the pathogen. However, this was by no means a disappointment to Draedon. To him, this was a sign of great promise, showing that the extent of the virus’ power was not limited to organic beings. Finding no need for the great machine any longer, Draedon abandoned it. Now, it stays dormant in the Astral Biomes, only awaking to protect these infections from outside threats.