The Biome Blade is a craftable Hardmode broadsword that auto-swings and is an upgraded version of the Broken Biome Blade. By default it does not fire any projectile nor does it have any special effects. However if the player stands still on flat ground while holding right-click for 2 seconds, they will strike the sword into the ground, attuning it to the surrounding biome, which will let them perform unique attacks. Amongst its attunements are upgraded versions of the Broken Biome Blade's own ones, and three new ones for the Hardmode biomes.

The sword has the ability to store an extra attunement in a secondary slot, which it automatically fills with the sword's previous primary attunement when it gets replaced by another one. Using the right-click function without standing still or without holding the button down will swap between the primary and secondary attunements.

Its best modifier is Legendary.

The Biome Blade can obtain 8 different attunements, listed below:

Pure Clarity is the Biome Blade's default attunement which can be obtained if channelled in a biome that doesn't have any corresponding attunement, such as the Purity or in the Underground. When swung, it fires a medium-range Purity Projection projectile which cannot pierce through tiles nor targets. Enemies struck by the projectile are inflicted with the Armor Crunch debuff, greatly reducing their defense temporarily.

Hitting a target with the sword itself will place a sigil over them, which will expire after 20 seconds unless the enemy is hit again, or if another enemy is hit in which case the sigil will reposition onto the new target. The sword's projectiles will home onto any enemy marked with the sigil.
Biome BladeBiting Embrace

Biting Embrace is an attunement obtained by channelling the sword in the Snow biome. It replaces the default swing animation of the sword with a custom swing combo that can be aimed, starting with a downwards swing, followed by a bigger upwards swing, and ending with a forward thrust. The second swing deals 115% of the weapon's base damage, and the final thrust deals 130% of the weapon's base damage, while also applying the Glacial State debuff for two thirds of a second on enemy hits, freezing them in place.

Arid Grandeur is an attunement that can obtained by channelling the sword in the Desert or in The Underworld. When this attunement is selected, the sword will be held out in front of the player, with 4 extra spinning blades floating around the sword itself. Hitting enemies with the blades charges them up, which increases their size, damage and hit frequency, going from 122 damage per hit to 160 damage per hit. The blade's charge decays over time when not hitting enemies.

Releasing the attack button while the blades have more than half their charges remaining will send the four ghostly blades out flying in the cursor's direction, dealing 450% of the weapon's base damage, no matter the charge amount.

Alongside its damage-dealing function, this attunement doubles as a movement tool that can be used by the player to gain control over their distance to their target. When in the air, the blades will function as a pogo stick that bounce the player away from any tile they hit. Additionally, hitting an enemy while in the air will bounce the player up, and make them partly "stick" to their target, with some of the enemy's velocity being transferred over to the player.
Biome BladeDecays Retort

Decay's Retort is an attunement that can obtained by channelling the sword in The Corruption or The Crimson. When used, the player will perform a quick lunge in the direction of their cursor, with the biome blade getting thrust forwards. Hitting enemies with the blade heals the player for 2 health, and will bounce them back. It is of note that while the player can only do two forward lunges before having to touch the ground again, they can pogo off of enemies as many times as they want before landing.

If the player lands three strikes before touching the ground, their next attack will turn into an empowered dash which deals 300% of the weapon's base damage while giving the player one second of invincibility frames. The empowered dash's availability is indicated by a sound effect.
Biome BladeGrovetender's Touch

Grovetender's Touch is an attunement that can obtained by channelling the sword in the Jungle, the Ocean or the Sulphurous Sea. When selected, the player will use the Biome Blade like a whip, with the sword itself being connected to the player's hand with a long vine, alternating between an overhead swing and a sideways one. Hitting enemies with the vine itself will only deal 60% of the weapon's base damage, but if an enemy is hit by the blade right as the whip cracks, the resulting hit will be guaranteed to be a critical strike, and its damage will be boosted by 120%. Hitting a critical strike with the whip will additionally target up to 3 other nearby enemies with vines sprouting from the original target, with each vine dealing 30% of the weapon's base damage.

Hitting a tile with the whip will propel the player towards it which can be used to get closer or further from a target, in order to land easier sweet spot hits.
Biome BladeHeaven's Might

Heaven's Might is an attunement that can obtained by channelling the sword in The Hallow. When selected, the player will spin the Biome Blade around themselves, with the sword increasing in speed, size and damage as its spun up. The sword's damage will range from 40% of the weapon's base damage at the start of the attack, and ramp up to 240% of the weapon's base damage once its fully wound up.

Releasing the attack button if the sword is more than halfway spun-up will throw it in the direction of the cursor, before getting quickly pulled back to the player's hand by ghostly chains. The thrown blade deals between 240% and 380% of the weapon's base damage, depending on the charge completion of the sword before the throw. After the throw, the player has to spin the sword back up. The availability of the sword throw is indicated with a sound effect playing after reaching 50% chargeup on the sword.
Biome BladeExtant Abhorrence 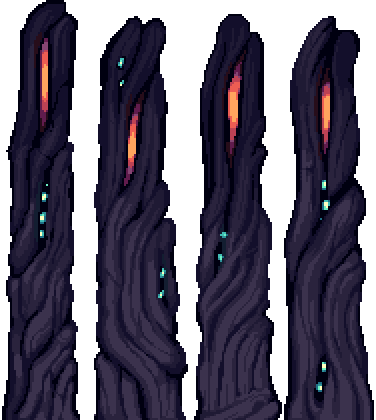 Extant Abhorrence is an attunement that can obtained by channelling the sword in the Astral Infection. When the biome blade is used with this attunement, the player will hold the blade out in front of them, charging it up slowly. Releasing the attack button after having the charge up more than 25% of the way will let the player do a quick lunge in the direction of their cursor, with the speed and damage of the lunge varying based on the charge of the sword, with a fully charged up lunge dealing 350% of the weapon's base damage. The lunge also grants the player a third of a second worth of invincibility frames if they hit an enemy during the lunge.

Hitting the ground with a lunge that was more than halfway charged will spawn one monolith at the impact location. If the lunge was charged more than 75% of the way through, two additional monoliths will sprout up on each side of the central monolith provided there is ground for them to appear out of, and if the blade was fully charged, a final two monoliths will appear at the side of the outermost monoliths, once again provided there is ground for them to spawn on. Each of these thresholds are indicated with a sound effect playing, and with the blade visually blinking. Each monolith will deal 125% of the weapon's base damage on their first hit, with every following hit only dealing 25% of the initial amount.
Biome BladeGesture for the Drowned

Gesture for the Drowned

Gesture for the Drowned (Liquid Wave)

Gesture for the Drowned is an attunement that can obtained by channelling the sword in the Sunken Sea, the Abyss. When selected, the player will sweep the biome blade from left to right, shooting out gravity affected water orbs. On ground contact, the orbs will turn into small waves that will ride along the ground. The waves may turn back into bouncing water balls if they come across gaps in the terrain.

If the biome blade is used underwater, or if a wave touches water, the projectiles will turn into bigger and faster water waves and will deal 50% more damage to any target, making it especially useful in aquatic biomes.