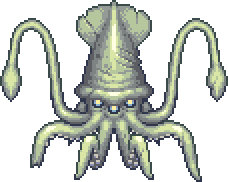 Not to be confused with the Giant Squid, an enemy that spawns in the 2nd and 3rd layers of the Abyss.

The Colossal Squid is a mini boss that spawns in the 3rd and 4th layers of the Abyss biome. Once the player gets too close or hits it, it attempts to kill the player by ramming them and firing damaging ink bombs, which burst into hovering ink clouds. It also has the ability to latch onto the player and "eat" them, inflicting the Obstructed debuff, greatly reducing visibility and inflicting rapid damage until they are released.

It can be detected with the Lifeform Analyzer.