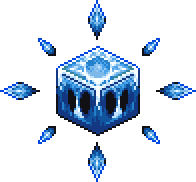 Cryogen is a Hardmode boss that can be fought in the Snow or Ice biomes which possesses many phases and features a multitude of projectiles and enemies.

Defeating Cryogen will free the Archmage, as well as generate Cryonic Ore in the Ice biome.

Cryogen does not spawn on its own and requires the player to summon it with a Cryo Key while in the Snow biome or Ice biome at any time.

Cryogen has six phases, each of which has its own attack pattern and AI. It will progress through these phases as it loses health.

Cryogen also spawns with an ice shield which protects it and inflicts contact damage; this shield must be destroyed to directly attack Cryogen and will regenerate 18 / 12 seconds after being destroyed. When destroyed, the shield will explode into a cross-shaped burst of 4

Leaving the Snow biome will cause Cryogen to enrage, almost doubling its speed and acceleration. 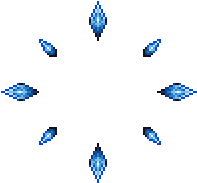 Yharim's prison for the archmage of the ice castle, Cryogen. It is a representation of Yharim's bitter hatred for the master of ice. When Yharim was young he ventured from the jungle temple to the ancient tundra where Permafrost resided. Yharim asked to learn from him in order to "peacefully" calm the denizens of the underworld. But the archmage saw through his ruse and viewed only bitter contempt within Yharim's heart and the fiery urge to annihilate the underworld obsidian towers and their inhabitants. When the archmage refused, Yharim prepared to take his leave. However, the archmage had not realized that Yharim had a contingency plan in place; around his dwelling a massive trap had been set. A magic circle of runes set to trap the power of whatever was caught inside. Permafrost suspected nothing, until the moment the runes activated, causing his castle to collapse inwards, trapping his body in a radial structure between dimensions. Cryogen is what remains, a mindless frozen structure contained by Yharim due to its uncontrollable nature and powerful magic.