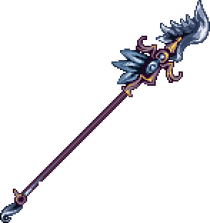 The Dragon Rage is a post-Moon Lord melee weapon dropped by Jungle Dragon, Yharon. When used, a baton is held at the player's position, rotating and spawning an explosion which deals 25% damage on every hit. Every 10 hits from the baton summons a ring of 10-15 homing fireballs outwards which deal 12.5% of the weapon's damage and create a damaging explosion on death.

Its best modifier is Godly. It cannot get modifiers that affect size.