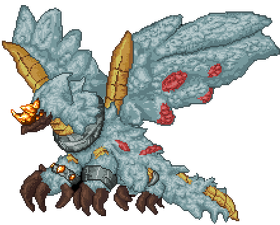 Jungle Dragon, Yharon is typically the third to last Calamity boss that you will face in your playthrough, fought after The Devourer of Gods. Yharon is summoned by using a Jungle Dragon Egg in the Jungle biome at any time.

Although Yharon must be summoned in the Jungle, leaving the biome will not enrage him. However, Yharon summons two border tornadoes 155 / 125 blocks to the left and right of you from the block you use the Jungle Dragon Egg. Going outside of these tornadoes will render Yharon nearly invincible.

Build walls before where the border tornadoes are placed as the tornadoes will increase with height. Usually, 127 blocks works in Normal and in Expert, while 97 blocks works in Revengeance and Death mode. These will function as a barrier to prevent the player from accidentally touching the border tornadoes, which will instantly kill them. Yharon will enrage if you go too high from where the Jungle Dragon Egg was used, to avoid this build a roof 660 blocks up from the starting position in Normal and Expert while have this roof be 555 blocks up in Revengeance and Death Mode. A single set of platforms in the middle as well as leveling the ground of the arena will give the player a place to reset flight time as well as prevent them from getting caught by the terrain. Great vertical and horizontal mobility is a must for this fight, considering the high mobility of the boss itself. Campfires and Heart Lanterns are a useful asset to boost your health regeneration, so they should be placed throughout the arena.

Throughout the fight, Yharon will summon Detonating Flames as he takes damage, so keep this in mind when building your arena.

Weapons dropped from The Devourer of Gods or crafted with Cosmilite Bars should suffice in most situations.

Yharon will spawn offscreen, meaning you should be prepared to dodge him as he approaches you. At the start of the fight, a tornado will appear on each side 120 blocks away from where you use the Jungle Dragon Egg. It is imperative to avoid these at all costs as they will instantly kill you.

In subphase 1, Yharon's pattern will always be the same: he'll do two shorter charges, spawn some Detonating Flames, do a short charge, then do a much faster charge preceded by a pause, before spawning Flarenadoes. It is important to keep ahead of Yharon to avoid his high contact damage. The faster dashes can be avoided by dodging perpendicularly. Yharon also tries to align himself above the player while in the fast charge telegraph, so dodging them is easier when falling.

At a certain health interval dependent on your difficulty, Yharon will become briefly invincible and move on to subphase 2. The pattern is largely the same, although Yharon will have a few more fast charges and now has a "bullet-hell" attack where he will shoot a barrage of fireballs in all directions. Yharon will always teleport above the player when he does the bullet hell attack, and he does charges out of the attack, therefore flying upwards before he begins the bullet hell can be useful to allow yourself to gain distance from Yharon.

Again, once he reaches a certain health interval dependent on difficulty, Yharon will become invincible and transition to subphase 3. This subphase typically lasts the longest and contains even more of Yharon's longer dashes. Between dashes, Yharon can spawn Detonating Flames and Flarenadoes. At the end of the pattern, Yharon will once again do a bullet-hell style attack, however the fireballs will be faster than in subphase 2. Again, Yharon teleports above the player and follows the attack with charges, so flying up before the bullet hell starts allows for you to put distance between yourself and Yharon.

As Yharon summons Infernadoes, it is useful to try and lead them near the sides of the arena where they are much easier to manage.

Upon reaching 55% health, Phase 2 will begin.

For a short while Yharon will be invincible, it is important to keep firing as Yharon will summon Detonating Flames to his aid.

Compared to Phase 1, Phase 2 is a drastically different style of fight. Although Yharon continues to charge at you, this phase has many more different projectiles. It is important to maintain good distance throughout the entire fight. The general approach to this phase is a circle or oval around the arena. When falling, using Suspicious Looking Jelly Bean or Normality Relocator is highly recommended to avoid Yharon as he gains on your position. When moving left and right, constantly dash to keep ahead of Yharon. However, be wary to not accidentally run into leftover projectiles while fleeing.

Note that Yharon's charge patterns change between subphases. In subphase 4, he only does slow charges. In subphase 5, he does a fast charge followed by a slow charge, which can potentially catch the player off guard unless properly accounted for. In subphase 6, he'll do fast charges, with nearby random teleports in between. It is important to keep an eye on where and when Yharon teleports before the second fast charge and to dodge accordingly.

Again, when Yharon summons Infernadoes, it is useful to lead them near the sides of the arena, where they are easier to manage.