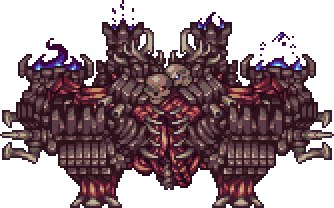 The Ravager is a Hardmode boss that can be fought at any time, however it is recommended to fight it after Golem. Ravager is summoned with a Death Whistle at any time.

It is recommended to fight Ravager in a flat area with plenty of room. Having a long, flat arena with multiple layers of platforms 20-30 tiles apart will help dodge Ravager's stomps and provide a large area to dodge its other attacks. The platforms will also especially help in Phase 2, where flight time is greatly reduced.

Weapons that are either dropped by Providence, the Profaned Goddess or made from Uelibloom Bars are typically the best choices for this fight.

Ravager has a similar AI to Golem: it attempts to jump above the player, stomp down, and deal heavy contact damage along with inflicting Armor Crunch. Dashes are crucial in order to avoid this attack. It is a slow-moving enemy and has a large hitbox, but makes up for it with its great amount of health and its high damaging attacks. Each of its body parts has separate health bars and they all move separately from each other with no distinct pattern. It has two claws on either side that shoot out in a similar fashion to Golem Fists. These can be avoided by speedily flying upwards or by attacking them to knock them back. The head shoots a homing nuke which can home in on the player but explodes after a short amount of time.

Ravager will inflict the Weak Petrification debuff, effectively grounding the player. It will also stop performing all its previous attacks. Ravager's head will detach from its body and start hovering around the player, occasionally firing a burst of bolts that inflict On Fire!. Ravager will aggressively launch itself into the air and attempt to align with the player before stomping down. It should be noted that it will not deal contact damage until it stomps down. The best way to dodge this attack is to run away in a straight line.

Ravager occasionally summons two large rock pillars that fly up into the air in an attempt to slam into the player, inflicting Armor Crunch if they connect. These can be avoided by dashing away from Ravager and keeping some distance from him. The rock pillars also cannot travel through platforms, allowing them to be dodged by hiding under one. It also summons two flame pillars that spawn on either side of the player and fire bouncing blue flames in the air. If you keep moving throughout the fight these should be a little easier to handle.

A few aspects of the fight are quicker: Ravager itself will jump more often, the drill missiles will track the player more accurately and faster while the Flame Pillars shoot projectiles in faster. In Death Mode, all projectiles are roughly twice as fast.