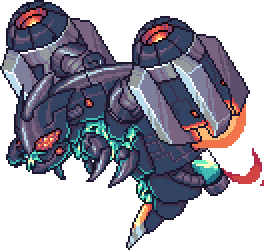 The Plaguebringer Goliath is intended to be fought in the jungle, and that is what this guide will focus on. When making an arena, a large box is preferred over a long track-like arena, as both horizontal and vertical mobility will be very helpful. Typically, you can reuse a Plantera arena for this effect. It is recommended to have just one platform spanning the middle of the arena, as vertical mobility will be huge for its dashes, and too many horizontal platforms will easily lead to getting caught by its dashes on your way down.

The Plaguebringer Goliath initially spawns off screen and will charge towards the player.

In Phase 1, The Plaguebringer Goliath has 3 attacks that she can cycle through. She will level herself with the player and perform three charges in quick succession, fly above the player while firing a series of powerful plague stingers and plague rockets at the player, or spawn Plague Chargers that vary in size. It is recommended to destroy these summons as quickly as possible as they can become a nuisance when there are too many of them. Either falling or flying upwards combined with dashing can be a a very effective way of dealing with her charges and a Rod of Discord can help when the player is cornered. Below 50% health, she will stop spawning Plague Chargers and instead spawn destructible homing plague missiles.

Along with spawning Plague Chargers, The Plaguebringer Goliath will also spawn Plague Mines which will chase the player and begin to slow down after a period of time, but they are indestructible until they fully stop. Some of her stingers will now home in on the player.

At 50% The Plaguebringer Goliath will transform into her 2nd phase, signified by the status message "PLAGUE NUKE BARRAGE ARMED, PREPARING FOR LAUNCH!!!". She will retain all attacks from Phase 1. She can also dash across the screen above the player and launch an arc of green missiles in the general direction of the player that will explode upon contact with tiles. The attack can be difficult to dodge, but flying up and down when she performs this attacks can be a reliable way to deal with it. Another strategy is to travel through the gaps between each missile; these gaps will become larger the further the projectiles travel.

At 80% The Plaguebringer Goliath will begin to perform diagonal charges in the place of horizontal ones. In addition, the Missiles she fires travel faster along with being more numerous.

Her charges are performed faster and Missiles will now travel at faster speeds.