Calamity Mod Wiki
Register
Don't have an account?
Sign In
Advertisement
in: Boss NPCs, The Hallow NPCs, The Underworld NPCs,
and 6 more 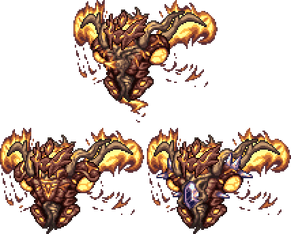 "The ever-rejuvenating guardians of the profaned flame."

The Profaned Guardians are a group of post-Moon Lord bosses fought in The Underworld or The Hallow. They need to be killed in order to obtain the Profaned Core, used to summon Providence, the Profaned Goddess, and each Guardian also drops a special respective "Relic" item.

Multiple weaker Guardians are also summoned during the fight against Providence.

All three Profaned Guardians spawn at the same time. The fiery main Guardian is immune to all damage until the rock Guardian and the crystal Guardian are defeated.

If the player exits the Hallow or Underworld for more than 5 seconds during the fight, the Rock and Crystal guardians will become invulnerable until the player returns.

The Profaned Guardians, born of the profaned flame that is never allowed to be extinguished, are the eternal servants of their god, Providence. They are the physical manifestations of the souls of deceased worshipers that were promised eternal life in exchange for their protective services; they are undying, and will reform some time after their demise from the core of Providence herself. They guard to the death both Providence and her artifacts, which were used as mediums to communicate between Providence and the flora and fauna of Terraria before Yharim appeared. When the tyrant began spreading his influence across the land the guardians fought to repel him. What started off as a perceived victory for the guardians was soon followed by the unleashing of the tyrant's trusted Devourer and his Sentinels. The guardians were destroyed, and retreated back to their god to be reformed once more. Years later the Terrarian manages to piece together one of the profaned artifacts, awakening the guardians once again.