Calamity Mod Wiki
Register
Don't have an account?
Sign In
Advertisement
in: Boss NPCs, The Underworld NPCs, The Hallow NPCs,
and 7 more 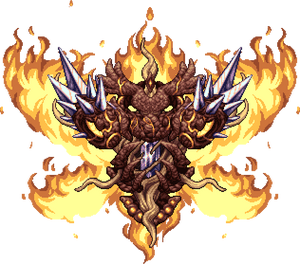 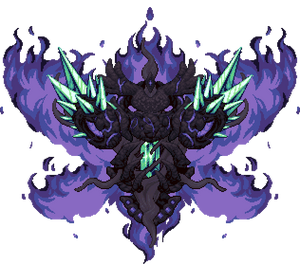 Providence, the Profaned Goddess is a post-Moon Lord boss fought in either The Hallow or The Underworld biomes.

Defeating Providence will provide the player with Divine Geodes, as well as the Rune of Kos used to summon the Sentinels of the Devourer. Additionally, Uelibloom Ore will generate in the world, and Calamitas, the Brimstone Elemental, the Ravager and Brimstone Crag enemies will be buffed and start to drop Bloodstone.

Providence does not spawn on her own and requires the player to summon her with the Profaned Core while in The Hallow or The Underworld biome. Her battle will change significantly depending on whether she is summoned at Day or at Night.

When summoned, a brief animation plays where Providence appears in a multicolored aurora of light before attacking; the aurora will be yellow and pink if summoned in The Hallow, red and yellow if summoned in the Underworld, or blue and purple if summoned at night. Providence will also play a sound resembling a fiery explosion instead of the regular boss roar.

Providence herself deals no contact damage, instead utilizing her wide array of projectiles, as well as minions, to deal damage. Providence's attacks and behavior vary depending on which phase and health she is currently in. She switches through these multiple phases pseudo-randomly, spending several seconds in one before choosing another.

If the player exits the Hallow or the Underworld for more than 5 seconds while fighting Providence, she will become completely immune to damage until they return. If still alive at nighttime, she will also act as if Boss Rush is active along with gaining a greenish-white tint to her crystals, projectiles, and wings.

At Night or in Malice Mode[]

During the Boss Rush[]

​Fire has no desires to speak of, nor does it have pains to lament. It has but one purpose: to burn. Such is Providence, a being of alleviating light, and corrupting twilight. The scriptures of its fanatics speak of a colossal impact of dark and light magic, during the ancient conflicts between angels and devils, how her creation was of holy and demonic origins, and her presence embodied that concept—in its denial of both. An indifferent crystal formed in the heat and power of the mana. Within, a conscious spark took a mind of its own. In the midst of the torrent of magic, Providence felt good, and evil: the utmost desires of the world, for ill-intent and to live. She was disgusted. Held in limbo between both forces, she began to take a form of its own; from the land itself, a shell of stone, and from the blaze of battle, her wings. Anything her flames swept across was cleansed, purified, and reduced to impartial ash. In life and death, there is a vice and virtue. In purity, where nothing lives and nothing dies, neither sin exists. That is her objective. A world cleansed of desire.

However, in the Devourer’s and its servant’s mad search to consume her, such deeds are risky, and the scouring of a world is not an action which would escape its knowledge. Thus, Providence basks in the center of the sun, where she remains dormant, gathering power from the energy of the nuclear fusion. It is there that she waits, patient and dispassionate, to one day be able to descend upon the earth, consuming all in a purifying flame. Nothing would be able to withstand the heat of the Goddess, tempered by the sun, and fueled by a singular purpose. She would leave nothing but an uncanny, sinless world behind. However, if you were able to grasp one of her relics, a substantial core of her power, it would surely incite her wrath. She would descend unto the land prematurely, not having gathered enough energy, nor with her relic properly harnessed, leaving her weak. Her aim would be to reclaim her artifact, and annihilate the culprit. However, with proper exploitation of the method described, a skilled enough opponent could potentially destroy her in battle, to avert the fate of the world.