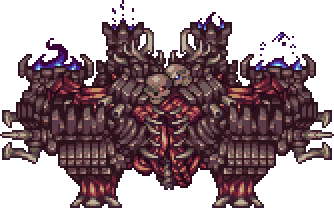 The Ravager is a Hardmode boss that can be fought anywhere on the Surface. On top of dropping a unique set of weapons and accessories, its purpose is to act as an efficient, though not necessarily easy, means of acquiring Life Alloys, Cores of Calamity, and other materials via Fleshy Geodes.

This boss receives a significant buff after Providence, the Profaned Goddess has been defeated, and it will begin to drop large amounts of Bloodstone as well via Necromantic Geodes.

When summoned, The Ravager will make a screaming sound instead of the regular boss roar.

The Ravager acts in a manner similar to the Golem, in that it is primarily grounded, travels by jumping, attacks the player with launching its claws at them as well as firing various projectiles, and that its body is immune to damage until all of its limbs are broken. 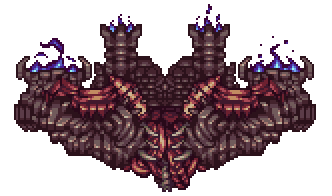 As the Jungle Tyrant's forces conquered the land, those who stood in his path used anything and everything they could to defeat or delay his endless onslaught. The strife of war pushes humans to the limit of their being, drawing both virtue and depravity to the surface in the darkest moments. Driven by desperation, it was in one such last stand that the honor of the dead was defiled; innumerable corpses of those already slain in battle were reanimated as a single misshapen abomination.

It was not resurrection, but allowing that which had fallen still to move once more. Its body was an unbreakable rampart of bone still blazing with an inferno of black magic, and its weaponry sufficient to equip an army. Its mind lacked the capacity for any thought beyond slaughtering all in its sight - but that was all its creators desired in their darkest moment.

After their final gambit killed the men that had cornered them, the flesh Golem's makers were butchered in short order. With the regenerative durability of a living fortress and destructive power capable of waging a war all on its own, the Ravager was never captured or defeated. It continues to roam the land long after the disappearance of the Tyrant it was meant to combat, mindlessly following the one order built into it until the day it is destroyed.