Not to be confused with Calamitas, a Hardmode boss.

"Do you enjoy going through hell?"

Supreme Calamitas is a post-Moon Lord boss that can be fought after defeating Jungle Dragon, Yharon, and intended to be fought around the same time as the Exo Mechs. She is currently one of the most challenging bosses in the Calamity Mod.

Defeating her will cause her to move in as a Town NPC, granting players access to the Enchantment mechanic.

If the Brimstone Witch NPC is currently alive in the world, she will disappear when Supreme Calamitas is summoned.

Upon spawning, Supreme Calamitas will create a 159x159 (inner available area is 157x157) square arena made of mostly unbreakable Arena Blocks. Leaving it will cause Supreme Calamitas to enrage, significantly increasing the velocity of all of her attacks and giving her 99% irreducible damage reduction.

Supreme Calamitas has several powerful attacks that she will switch between in a consistent cycle. She always remains either directly above or to the side of the player, only breaking position during Bullet Hell phases or during her devastating dash attacks.

While Supreme Calamitas is mobile, she will switch between these attacks in a well defined cycle.

Once she enters her second phase at 40% HP, the delays between her attacks as well as inside her attacks become shorter; she charges more aggressively and only half as often per attack.

Supreme Calamitas has a constant attack cycle which only interrupts when she is not attacking at all. Neither going through bullet-hell phases, nor switching to her second phase changes the current position in this cycle. It repeats once it is finished.

The attack cycle (starting as soon as the first Sepulcher is summoned):

Note that every time she shoots bursts of Brimstone Darts, some bursts are replaced by Brimstone Fire- and Gigablasts.

Since it is a relatively long cycle with multiple occurences of every type of attack, it is time consuming to fully memorize and comprehend it. Whilst it is not necessary to do so, it proves beneficial when playing in harder difficulties and/or with special constraints, like the Iron Heart, Defiled Feather or Armageddon.

Supreme Calamitas will perform these attacks once, triggered by her reaching certain amounts of health. 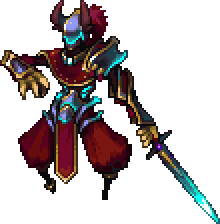 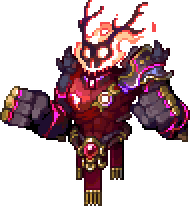 Calamitas' true name is unknown. She was born in a mountainous region to a family of extremely skilled mages whose destructive powers rivaled those of demigods. They taught her how to master the vehement and volatile natures of dark magic, without giving in to the negative emotions that these powers can inflict upon the wielder. "The dark is within all of us, but when gazing into darkness the darkness also gazes into you," her father told her, quoting a famous philosopher. However, one morning, after a particularly heated clash with a rivaling faction, Calamitas woke up to find her parents and siblings dead, hung on crucifixes by an angry mob. Filled with hatred and rage, Calamitas forgot what her parents had taught her, and brought devastation upon the mob, burning them with hellfire and teleporting them to the underworld to be tortured for eternity. Calamitas, defeated and sobbing, retreated to her now-vacant cave carved out in the mountainside, taking to practicing the magic of necromancy in order to revive her parents and 2 brothers.

After her success in bringing back her siblings she heard an ethereal and almost-mesmerizing voice telling her to seek refuge in the Jungle. Following this, Calamitas wandered toward the Jungle, entranced by some unknown force. She found her way into the Jungle Temple, where Yharim, the man who had spoken to her, resided. He had felt her mastery over the arcane due to her immense and manic outburst of destructive power. He eventually recruited her into his army after several long and persuasive talks over what truly matters in their world. When Amidias refused to help Yharim in a ritual, to awaken a slumbering god, Yharim had Calamitas incinerate the oceans as her first mission, thus causing the Desert Scourge to go on a rampage.

But, somewhere deep down in her psyche, the good in Calamitas still existed. Weeks passed, each day she argued more and more with herself over what was necessary to achieve a goal, and ultimately began distrusting Yharim. One day, Calamitas met with Yharim and attempted to convince him that his logic is flawed. Yharim heard none of it, and sent her immediately out of his throne room. That very same day, Calamitas betrayed Yharim by unleashing the ancient Golem using one of the ancient Power Cells. The Golem rampaged through the temple, distracting Yharim and his soldiers. Calamitas used this time to sneak up to Yharim's throne and procured a few documents containing some helpful information on Yharim's most valiant opponents, Braelor and Statis.

When Yharim and his men obliterated the Golem he cursed Calamitas for her betrayal. Due to her being a fair distance away the curse had a lessened impact on her, but it still managed to worm its way into her mind. Over time the curse slowly drove her mad, and ultimately she ended up returning to Yharim's side after the deaths of Braelor and Statis. Yharim has since removed the curse in exchange for her infallible servitude and unimaginable cruelty towards his opponents.​