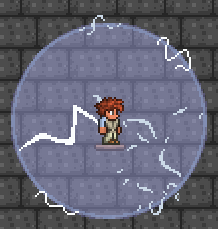 The Tesla Potion is a craftable Pre-Hardmode buff potion. Upon consumption, it grants the player the Tesla's Electricity buff which spawns an electric aura around the player, dealing 15 typeless damage, inflicting the Electrified debuff as well as the Galvanic Corrosion debuff which freezes non-boss enemies. Critters and other passive NPCs are unaffected.

This is a list of NPCs immune to the Galvanic Corrosion debuff.