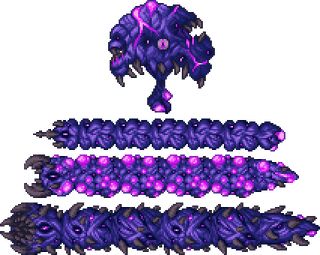 "An abomination of comingled flesh ... infested primarily by blood-slurping worms."

The Perforators are a group of Pre-Hardmode bosses fought in The Crimson. They consist of 3 worms with varying appearances, sizes, and behaviors, and a crimson, fleshy hive.

They are the Crimson counterpart to The Hive Mind.

The Perforators do not spawn on their own. The player can summon them manually with Bloody Worm Food or by killing a Perforator Cyst while in The Crimson. When spawning, the Perforator Hive will deal no contact damage for the first 3 seconds of its life to prevent cheap hits.

The Perforator Hive will hover above the player and shoot falling projectiles, accelerating towards the player to attempt to actively stay above them at all times. As it loses health, it will spawn Perforator worms with different sizes, stats, and appearances. All three worms can exist at a time.

The Perforators all behave like typical worms, burrowing through blocks and charging at the player. However, if their heads are too far away from the player (18.75 / 15 / 12.5 / 10 tiles), they gain the ability to fly in order to return to the fight or reach an elevated platform more easily. Each worm has a trait that differentiates one from another, from increased speed to the ability to lunge itself above the player.

The Perforator Hive enrages outside the Crimson biome and on the Surface, increasing their maximum movement speed.

During the Boss Rush[]

Emerging from the fleshy carcass that is the crimson, the Perforator hive trails its carrion-like protrusions across the ground in search of purity— and prey. Once a victim is detected, its spawn, massive tunneling worms which burrow violently into dirt and bloody tissue alike, rapidly encroach upon the unfortunate target to tear it to pieces.