The True Biome Blade is a craftable Hardmode broadsword that auto-swings and is an upgraded version of the Biome Blade. By default it does not fire any projectile nor does it have any special effects. However if the player stands holds the right-click button for 2 seconds, they will raise the sword up towards the sky, attuning it to the surrounding biome as lightning strikes the blade, which will let them perform unique attacks.

Its best modifier is Legendary.

Swordsmith's Pride is the True Biome Blade's default attunement which can be obtained if channeled in a biome that doesn't have any corresponding attunement, such as the Purity or in the Underground, as well as in The Hallow. It combines the effects of the Pure Clarity and Heaven's Might attunements from the Biome Blade.

Releasing the attack button if the sword is more than halfway spun-up will throw it in the direction of the cursor, before getting quickly pulled back to the player's hand by ghostly chains. The thrown blade deals between 275% and 450% of the weapon's base damage, depending on the charge completion of the sword before the throw. After the throw, the player has to spin the sword back up. The availability of the sword throw is indicated with a sound effect playing after reaching 50% chargeup on the sword.

Hitting an enemy with the thrown blade will place a sigil of purity over them, making all of the sword beams home in on them, and biasing the random sword beams' angle towards the marked enemy's direction. The sigil will expire after 20 seconds unless the enemy is hit again, which refreshes the sigil's duration, or another enemy is struck, in which case the sigil will be replaced by a new one over the new enemy.

When in the passive slot, the Swordsmith's Pride attunement causes sword beams to occasionally shoot out from the sword when used, dealing a flat 200 damage and applying the Armor Crunch debuff.
True Biome BladeSanguine Fury

Sanguine Fury is an attunement obtained by channeling the sword in the Desert, The Underworld, The Corruption or The Crimson. It combines the effects of the Arid Grandeur and Decay's Retort attunements from the Biome Blade.

When this attunement is selected, the sword will be held out in front of the player, with 4 extra spinning blades floating around the sword itself. Hitting enemies with the blades charges them up, which increases their size, damage and hit frequency, going from 300 damage per hit to 600 damage per hit. The blade's charge decays over time when not hitting enemies.

Releasing the attack button while the blades have more than 80% of their maximum charge remaining will send the four ghostly blades out flying in the cursor's direction in a wheel formation, dealing 450% of the weapon's base damage, no matter the charge amount. Attacking immediately after releasing the swords while pointing in the direction of the thrown wheel will make the player quickly dash towards the wheel, damaging every enemy in the way for 300% of the weapon's base damage, with each of these hits being a critical strike and healing the player for 6 health.

Alongside its damage-dealing function, this attunement doubles as a movement tool that can be used by the player to gain control over their distance to their target. When in the air, the blades will function as a pogo stick that bounce the player away from any tile they hit. Additionally, hitting an enemy while in the air will bounce the player up, and make them partly "stick" to their target, with some of the enemy's velocity being transferred over to the player.

When hitting enemies while the Sanguine Fury attunement is selected as the sword's passive attunement, the player will rarely be *

Lamentations of the Chained is an attunement that can obtained by channelling the sword in the Snow biome, the Jungle, the Ocean or the Sulphurous Sea. It combines the properties of the Grovetender's Touch and Biting Embrace attunements from the Biome Blade

When used, the player will hold the sword in front of them, summoning 3 separate very fast chained blades that relentlessly whip anything standing in front of the player. Hitting enemies with the flail's chains will only deal 50% of the weapon's base damage, but if an enemy is hit by the tip of the flails, the resulting hit will be guaranteed to be a critical strike. Hitting a critical strike with the flails will additionally target up to 3 other nearby enemies with ghastly chains sprouting from the original target, with each chain dealing 50% of the weapon's base damage.

When selected as a passive attunement, Lamentations of the Chained will summon a ghostly chained hook that floats behind the player. When the player lands a hit, the hook has a chance to quickly swirl around them, dealing a flat 500 damage and inflicting the Glacial State debuff to any enemy hit, freezing them in place for 1,66 seconds.
True Biome BladeMercurial Tides 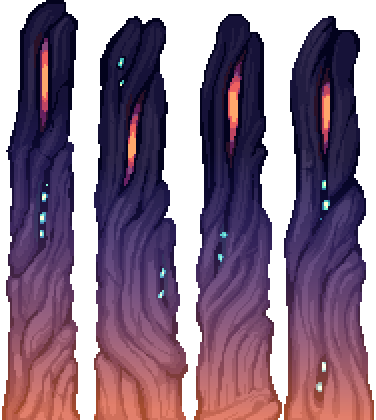 Mercurial Tides is an attunement that can obtained by channelling the sword in the Sunken Sea, the Abyss or the Astral Infection. It's a fusion of the Extant Abhorrence and Gesture for the Drowned attunements from the Biome Blade.

When the biome blade is used with this attunement, the player will hold the blade out in front of them, charging it up slowly. Releasing the attack button after having the charge up more than 25% of the way will let the player do a quick lunge in the direction of their cursor, with the speed and damage of the lunge varying based on the charge of the sword, with a fully charged up lunge dealing 350% of the weapon's base damage. The lunge also grants the player a third of a second worth of invincibility frames if they hit an enemy during the lunge.

Hitting the ground with a lunge will spawn waves of monoliths rippling from both sides of the impact point, with the amount of monoliths being dependent on how much the lunge was charged up. The completion of each quarter of the charge will be indicated with a sound effect playing, the blade visually blinking, and by a blue pulse shockwave being emitted around the player. Each monolith will deal 110% of the weapon's base damage on their first hit, with every following hit only dealing 15% of the initial amount, while the shockwaves emitted during the chargeup deal 80% of the weapon's base damage.

In the passive slot, the Mercurial Tides attunement causes the player to emit shockwaves around themselves every 2 seconds while attacking, dealing a flat 200 damage.

The on-hit passive effects from the Sanguine Fury and Lamentations of the Chained attunements are affected by an internal proc chance that varies depending on the source of each hit.